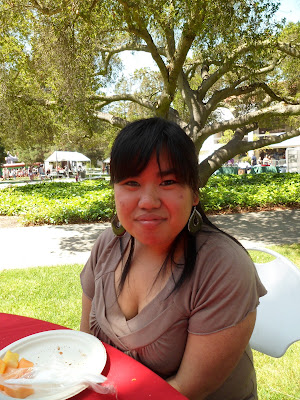 Alright then, let’s get started.

Service (or, why I love CILSA)

When I first started this year, I was incredibly excited to start working for CILSA. I had no idea that the students and staff I would work with would become like my family. As someone who did a lot of the behind-the-scenes work for the service-learning and community-based research courses on campus, I was constantly in awe of the amazing student leaders, community organizations, professors, engaged students, and CILSA staff.

All of these wonderful people really helped restore my faith in humanity. Yes, I know it sounds strange, but I’m an idealistic college student – every issue in the world seems to send my emotions in every which way. After spending a year with a group of people that consistently and actively works for social justice, I truly do believe that change is possible. It’s not that I didn’t believe it before. It’s that I didn’t really have concrete evidence of this in my life until this point, given my comfortable suburban life and lack of service involvement regarding pressing needs in the community.

I used to think I had all the answers, you know? I used to think that I was the only one at my high school who cared about that nebulous term we call “the issues.” I didn’t realize there were different ways to be involved and that really, in order to create real, lasting change, you have to work with others. Not against them.

If you’re friends with me on any of my social networking accounts, you probably already know about my trips down to the Plaza for Occupy Oakland. After hearing so many conflicting messages about the movement, I knew I had to check it out for myself. So I grabbed my student ID, bought a BART ticket, and found myself a place on the concrete steps. There is so much to be said about a movement that relies heavily on social networking to mobilize the people. In fact, so much has already been said, especially in regards to the Arab Spring. It’s resourceful. It’s out of our office chairs and into the streets. It’s this strange mix of hacktivism and classic activism. It’s fascinating. It wasn’t perfect (nothing ever is), but it was something and it had people talking about something other than reality television.

But it wasn’t long before I began to realize that not everyone had a favorable view of the Occupy movement. I understood the reservations people were having, the aversion to encampments, the confusion around the multitude of issues that occupiers were advocating. I understood that. What I didn’t understand was the extreme dislike that many people had for demonstrations/protests/public signs of dissent. Perhaps people thought that the occupiers were extremely dangerous. Perhaps they thought the whole thing was costing the city too much money. Whatever the reasoning was, I had trouble understanding it.

I don’t understand why a dissatisfied public should be expected to simply accept what’s been given to them.

The conversations I was a part of and overheard were amazing. There was a sizable about of diversity in terms of age, ethnicity, and careers. I am was in awe of the wisdom being shared, of the exchange of books, and the desire to help people with shelter and food. There was a consciousness around the very use of the word “occupy.” There were so many different people who were having conversations about changing the world. While things may have gotten tense from time to time, voices were being heard – and that’s something quite different from the media shouting match/saturation we’re subjected to.

I could go on and on about this, but in sum, I’m interested in seeing where this movement will go, especially if social media continues to play a role in mobilization. I’m also really interested in how the mainstream media covers demonstrations/protests, but I suppose that’s a project for another time.

Student Involvement (or, how on earth did I make my schedule work)

I’m fairly certain I did more student involvement-type things during Fall semester, what with dabbling in the school paper, volunteering at the WRC, attending some (SUP)port Justice meetings, working for CILSA, and being a part of the student commission for the Honors Program. I didn’t crash and burn (because let’s be real, this is me and crashing and burning is simply not an option), so that’s good. It’s just strange that I was able to fit in some time for homework during all of that. I can’t say I have any regrets about it, though I do wish I could have gotten more sleep. I also think I could have been more involved with student organizations, but this too is a discussion for another time.

Performing (or, how I learned how to get over it)

V-Day was quite possibly one of the highlights of my very, very short on-stage career at SMC. Granted, I had only performed at one other campus event, so it’s not as though V-Day had stiff competition. I mean, I enjoyed performing “Man in the Mirror” with Jennifer and Grant at the Hunger Banquet, but the acting high is something else. I’m glad that people enjoyed the performance so much, and I have to say that I am so glad to be a part of two performances that donate their funds to community organizations.

If you told me in high school that I was going to perform in front of people during college, I wouldn’t have believed you. Now I crave the acoustic jam sessions and am already making plans to rejoin the V-Day cast for senior year. I also enrolled in beginning voice for next semester, so hopefully that turns out well. The stage holds power – when you’re on that stage, for a brief moment, you have the attention of everyone in that room. That’s intense. I also have to say that Al was totally right… making people laugh is addictive, and I’d love to be able to do it again. There are no words to describe the amazing women that I met through that performance. I love them, and I am so grateful I got to share the stage with such wonderful ladies.

Gender studies and ethnic studies (or, power to the people)

This year, I supported the service-learning section of Introduction to Women’s and Gender Studies as a part of my work with CILSA, and through that I learned so much. I continue to learn more and more every day, and I am so thankful that I get to work with so many amazing women on this campus.

My foray into ethnic studies was an eye-opener. I completed an Honors Contract about whitewashing in Hollywood film (specifically M. Night Shyamalan’s The Last Airbender) and I learned so, so much in my Asian Americans in the Media course as a whole. I am now more aware of Asian American activism, and now I feel so much more empowered to create change.

The other day I watched Precious Knowledge, a documentary about the ethnic studies program in Tuscon, and I have to say that I agree with the idea that ethnic studies matters. Ethnic studies tells me that I can be a change agent because others like me (in terms of gender and ethnic background) have done so. Ethnic studies gives me a more complete view of the history of the United States. I am now more aware of the injustices that occur around me as well as the system that keeps those injustices intact.

Where I’m going from here

If you haven’t noticed, I mostly go through life by winging it. I’ve been fortunate enough to stumble into things that I love doing. Now that my passions have become more obvious, I’m going to be much more intentional about what I do. I remain hopeful that this will take me to where I want to go. As always, I’m both excited and terrified. Two years down, two more years to go. Bring it.

One thought on “Halfway there”